Metallic window tint is window film constructed with the use of metals and very little to no dyes. This page is where you can get reliable information on the good and the bad of these window films.

First of all, we are talking about window films that are highly reflective in nature and look like a mirror. These films are incredible heat blockers and will offer a measure of privacy, but they are generally not legal in any state in the US or Canada.

Because the film is so reflective and usually impossible to identify the vehicle's occupants that they make it dangerous for other drivers, and hazardous for law enforcement officers during routine traffic stops.

How Is Metallic Window Tint made? 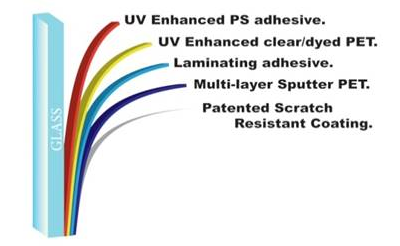 There are actually two different ways that this window film is manufactured.

What is the difference between the two? Actually quite a lot and the information below will enlighten you on whether these films are right for you.

Vapor Deposition technology is actually the process where the metalized particles are super heated into a vaporized fog. As the material passes through a manufacturing machine, the metal is "deposited" on the film thereby coating the film with metal.

This process usually results in an uneven coating of metal onto the film.

Sputtering is the most recent technological method of adhering metals to film. A low-pressure vacuum chamber is used to create a gas atmosphere. Electrical energy creates a negative charge to the gas molecules. The vacuum pressure allows the gas molecule particles to move rapidly about the chamber. As charged particles collide with a metal “cathode”, small particles of the metal are chipped off the cathode and deposited on the film.

Sputtered film is the better metallic window tint as it is a controlled way of embedding the metal into the film as opposed to depositing it on the film in a hap-hazard way.

With Deposition technology, there is an unevenness to the way the metal is applied to the film, leaving (under a microscope) hills and valleys where the metal can break off and eventually look terrible.

Sputtering alleviates those issues in laying down a consistent metal layer of thickness.

This superior construction makes Sputtered films the first choice for commercial and residential films.  However, these films are not practical for automotive applications.

We DO NOT recommend these films be applied to motor vehicles operating in the state of Indiana as they are illegal, difficult to install, and take forever to dry out - as a result of the heavy metal coating.